In the state of Massachusetts, facing assault charges is no minor matter. Anytime you have the potential to serve time behind bars, you should take it seriously. And any criminal conviction can haunt you for the rest  of your life, even a misdemeanor that seemed like no big deal at the time. 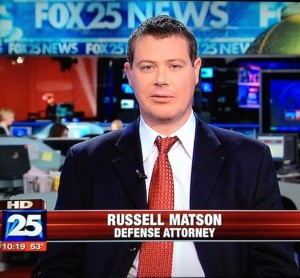 And even a misdemeanor will show up on your record, and could stay there indefinitely.  A felony conviction is even worse —a violent felony offense can make it harder to get a job and even harder to find a place to live.

My name is Russell Matson, and I am a criminal defense attorney. I protect people accused of crimes like assault in all Massachusetts courts.

While assault laws vary from state to state, most people across the country view such laws as “violent”. If you have to list an assault conviction on your application, few employers will take the time to ask about the situation that led to the case, they’ll simply call someone else.

That’s why if you are accused of an assault crime in Massachusetts the time to fix it is now, before you are convicted. If you just plead guilty, you’ll never get a chance to go back and challenge the facts that lead to your charge.

If you are facing assault charges in the Massachusetts court system, call me now to discuss how I can help you. My office number is (781) 817-6332.

The strict legal definition of assault is an act which puts the fear of harm in another. You can see that an assault doesn’t have to even involve actual physical contact, but merely the threat of such contact can be enough.

Battery, on the other hand, is the act of unwanted physical contact, typically resulting in harm or at least offense.

Under Massachusetts law, an assault or an assault and battery are both punishable by up to 2.5 years behind bars and fines reaching $1,000.

If there is a protection order in place at the time of the assault, if the victim is pregnant, or if the assault results in serious bodily injury, however, your potential penalty is increased to up to 5 years in prison and fines up to $5,000.

The penalty for the assault can be further increased if the victim is a child, mentally retarded, an EMS or ambulance attendant, a public utility worker, law enforcement, or elderly.

The likelihood of you spending time in jail for this offense depends on a number of factors. While your criminal history and the facts of the case will affect your potential sentence, the prosecution has to get a conviction before that even happens.

Contact us today to be put in touch with a local defense attorney that may be able to help. A criminal defense attorney is tasked with looking out for their clients best interests and ensuring their Constitutional rights are protected.

He has appeared in every district court in Massachusetts, representing clients accused of many different criminal offenses.